There’s nothing more exciting than the first week of a grand slam. For me, this is mainly due to the busy schedule and the amount of matches that are available during the day. The first week of this year French open has been entertaining and yet surprising. The bets placed on players have now been questioned, particularly in the women’s draw. We’ve seen the top two seeds and last year’s runner up in the women’s field defeated. We’ve also seen the king of clay Rafael Nadal struggle to win his matches. The second week will be the business part of the tournament and it will sort out the champions from the tennis players. Before that happens, let’s look back at the memorable moments of the first week.

In the women’s draw, there have been some stunning upsets and some new stars born. I would like to go back to the very first match between Razzano and Gajdosova. This was a very sentimental match as both women have lost their husbands in the past few weeks. Jarmila Gajdosova divorced her husband weeks before the tournament and Virginie Razzano sadly lost her husband to a brain tumor. It’s unfortunate that these two had to meet each other in the first round but I would like to congratulate both women, particularly Razzano on coming back after losing so much. 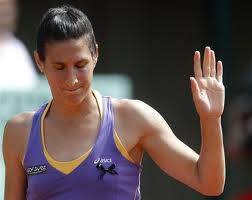 Virginie Razzano bravely returns after the death of her husband.

Another memorable moment was the match between Lisicki and Zvonareva. Lisicki, a former Wimbledon quarter finalist, is returning from injury and a slump in her ranking and has given the world number three a run for her money. In this match, Lisicki has impressed and shown the potential of what she can bring to the game. It was a close and it was a long match. In the end Vera clinched the match after coming back match point at 5-2 down in the third set. A devastated Lisicki had to be taken off the court on a stretcher due to injury. I hope in the future that Lisicki can get fitter so she can really perform to her ability.

We’ve also seen a number of upsets in the women’s draw. Sharapova and Zvonareva were lucky to find themselves coming back to win their tough second round matches. However, Clijsters, Stosur and Wozniacki weren’t so lucky. Clijsters had a convincing lead in her match against Arantxa Rus, but she failed to maintain the lead and ended up losing the match. Meanwhile, the 2010 runner up Sammantha Stosur started off on a bad note by losing the first set. She looked like she was coming back after a quick second set win and an early break in the third set. Dulko continued to play consistently as Stosur began to play numerous unforced errors which in the end cost her the match and possibly, her place in the top 10.

Clijsters digs deep but loses her second round match.

Finally, we’ve seen the world number one Caroline Wozniacki demolished by Daniela Hantuchova. This is an upset that many didn’t see coming. Hantuchova in the past has a history of blowing big leads, but today she kept her level and kept her calm when it really mattered to achieve her equal best place in the tournament. All these upsets have caused the draw to be more open than it was before. This year we could see someone unexpected to win the whole thing, just like Schiavone last year. It will be interesting to see what becomes of the womens field in the next week.

We now move to the men’s draw where it’s been more consistent with the top players. We’ve still seen upsets from Berdych, Melzer and Tsonga in the early rounds, but the main competition and threats still remain in play.

Federer has been an underrated pick to win this year. With the focus now on Rafa and Novak, we now see Roger playing under the radar for once. Roger is now into the fourth round without dropping a single set. Nadal on the other hand had an unfortunate first round match up with John Isner. The match required him to fight hard as he faced defeat two sets to one down. In the end, he was able to claim victory over marathon man and big server John Isner. The second round match up was against compatriot Pablo Andujar who has taken fans by surprise by challenging Nadal on his dominant surface. He had great energy and self belief and has now made my list of favourite tennis players. Nadal has progressed now to the third round where he will meet Croatian Antonio Veic who knocked out Nickolay Davydenko in five sets. With the tough competition ahead in his draw, Nadal has to recover his form quickly to what we all expect from him for him to win the tournament.

Andy Murray has also been an underrated force in this tournament. Despite not being as strong on clay as his other three competitors, his draw has completely opened up with the defeat of number eight seed Jurgen Melzer. Murray will surely make the semis unless he plays terribly. He may not win the championship but he’ll be progressing far into the second week.

Finally, the red hot favourite player of the season and the big favourite to win is Novak Djokovic. Novak is coming in with a huge streak (not sure the exact number as every source tells something different). He’s coming in with a victory against Nadal on clay, which is reasonable for him to be picked as the favourite. But today, Djokovic now faces his biggest challenge in his third match encounter. Argentinean player Juan Martin Del Potro is his biggest threat to making the finals and ending his streak. The match currently stands at 6-3 3-6 and will continue later today. Whoever wins in my opinion will be in the final and likely to win the whole thing as well. For now, the epic battle will continue on court Suzanne Lenglen today.

Thumbs up from Djokovic. 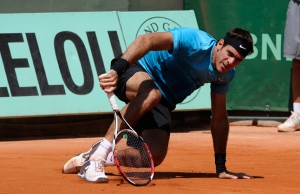 The man who may end it all.

This concludes my look at the first week of Roland Garros. It’s been a really entertaining week and definitely worthwhile for me staying up in the cold to watch the matches. Tomorrow I will make a new analysis with some revised predictions on who will be the winners of the 2011 French open so be sure to follow my twitter account and subscribe to my blog. For now, enjoy the tennis and good luck to the players.

Unlike the mens draw, the womens seem more unpredictable. There always seems to be a surprise in each grand slam.

Stosur and Schiavone return one year later after their grand slam breakthroughs, can they match the result they achieved last year? Wozniacki comes in as number one but still without a grand slam. Sharapova comes back with a win in Rome, can she bring home her first grand slam since her injury. Clijsters returns to Roland Garros since 2006 but this time with an injury. There’s many stories to be told in the womens draw so lets predict who will win this years french open.

Wozniacki faces a possibly difficult opener against Kimiko Date Krumm. Her biggest threats to the quarter final are Daniela Hantuchova, Aravane Rezai and 2009 french open champion Svetlana Kuznetsova. Wozniacki Vs Kuznetsova can go either way, but really depends on how Kuznetsova is on the day. Samantha Stosur is on the other half of the quarters with some great players in her section. However none of them seem to be good enough to challenge Sam to the quarters.

Zvonareva has been a surprise package in the past year reaching great results in the last three grand slams. She faces a tough match against Sabine Lisicki in the second round and Nadia Petrova in the third. Despite this, Zvonareva seems to be a shoe in for the quarters, provided she plays well. The bottom section contains last years champion Francesca Schiavone. There doesn’t seem to be much players that will be able to challenge her until the fourth round when she could either meet Flavia Pennetta or Jelena Jankovic. This could go either way but I still believe Schiavones fight will bring her through.

Azarenka comes into this tournament in great form and with her highest ranking. Her challenge will come in the fourth round where she could possibly be matched up against 2008 champion Ana Ivanovic. Ivanovic seems to be getting her game back in the past year and even though she faces Makarova (who knocked her out of Australian Open) in the second round, i’m sure she’ll do well in Roland Garros. The top section features Chinas best hope Li Na. The draw wasn’t friendly to her this tournament as she faces Barbora Zahlavova Strycova in the first round. Also Patty Schnyder, Dominika Cibulkova and Petra Kvitova are all in her section of the draw which is unfortunate. Li Na has a mountain to climb on her way to the quarters.

Clijsters comes in this years tournament returning from injury and it could hold her back in this years tournament. Her section contains players such as Andrea Petkovic, Jarmila Gajdosova, Virginie Razzano and Maria Kirilenko. If Clijsters plays well, she will surely go through the quarters. In the other half contains Maria Sharapova. Sharapova comes into this years french open in the best form since her return from injury. Her toughest competition on the way to the quarters are Yanina Wickmayer and Agnieszka Radwanska. If Sharapova continues her dominant and aggressive style, she’ll be unstoppable.